Imagine you wake up in the morning and pour a cup of coffee, and your phone beeps with an Instagram notification. Your close friend, Emily, has shared a beautiful video from the Swiss Alps. The lush greenery set against a backdrop of glaciers takes your breath away and brings a smile to your face. You comment on the video and chat with Emily for a few minutes as you finish your coffee. Instagram has already added value to your day!

Whether you’re watching an Instagram story, posting a Medium article, or commenting on a Facebook profile picture, companies want you to love and find value in their products. If a product truly adds value for you, you will engage with it more deeply. If it makes you happy, you visit it more frequently and become an active user. In other words, engagement drives stickiness, which drives retention — and that, in turn, drives growth (see Figure 1). 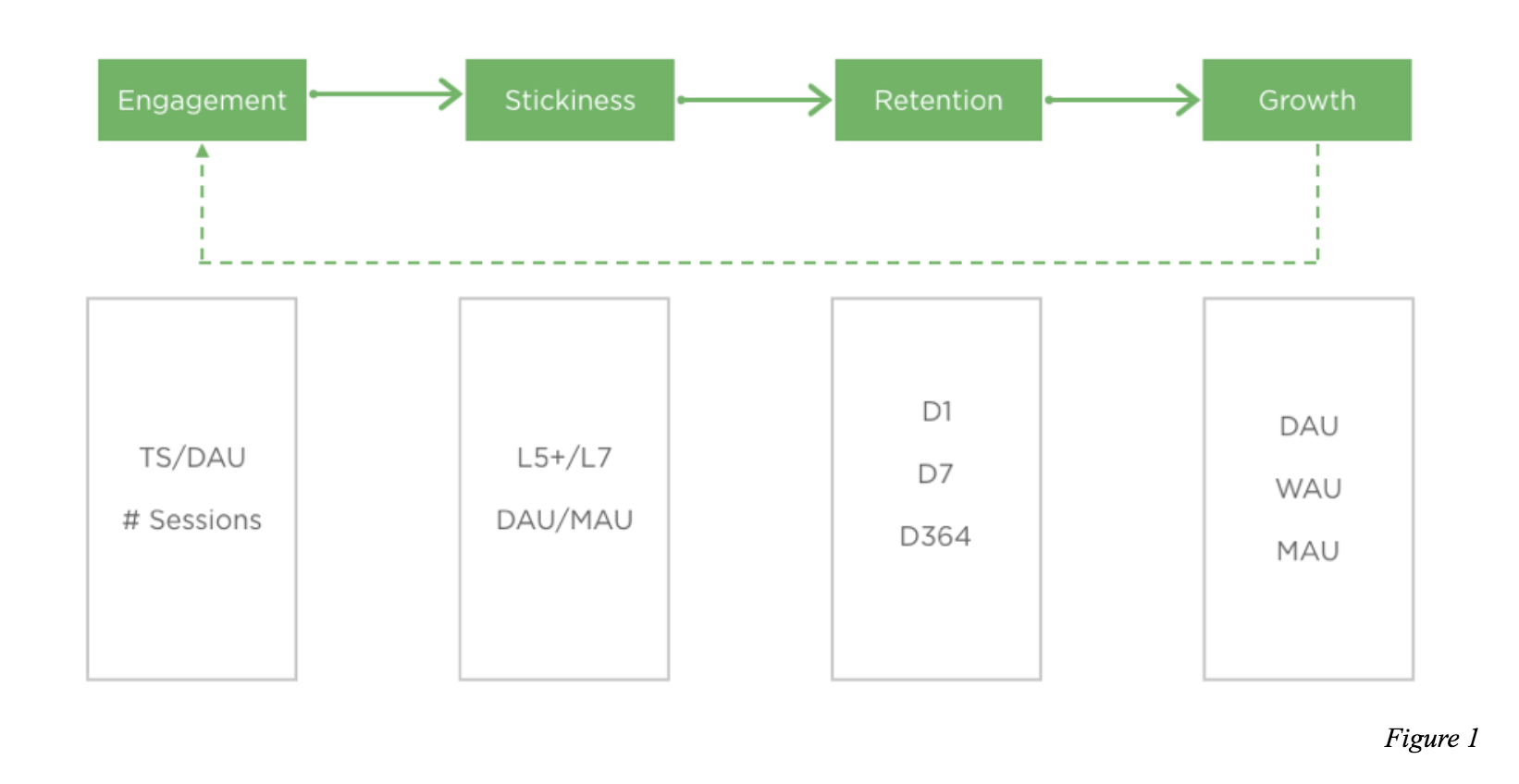 In order for your product to achieve its full potential and create the most value for the most users, it must grow. Growth needs to be understood in the context of the overall market and the number of users relative to the total addressable market — and with respect to the balance between new user acquisition, churn and resurrection.

Ideally, the new users you acquire as your product grows would continue to engage with the product forever. That’s retention — the measure of people who tried the product and liked it enough to return. Many consumer-facing businesses define retention in terms of the percentage of users who take a given action such as logging in or sending a message within a certain period of time following sign-up. Subscription and SaaS businesses tend to define retention in terms of dollars spent within a certain period of time after the user’s first spend.

While stickiness generally drives retention, a product that is retaining and growing well may not necessarily be sticky. Retention is simply about users returning to your product; stickiness is about them returning of their own volition. Stickiness helps reduce your dependency on tactics such as push notifications. For example, Facebook is sticky because of users’ urge to share, and because of their curiosity about other people’s lives.

Not all daily active users (DAU) are created equal. Consider three Facebook users: Alice, Bob and Sarah, all of whom joined the platform on the same day and are using Facebook today. Alice loves and finds significant value in Facebook. She is deeply engaged — liking, commenting and posting often. She checks Facebook every hour and spends up to two hours on the platform per day. She does not wait for notifications, instead checking in of her own volition.

Bob is less engaged. He has fewer friends on Facebook than Alice, and checks in only a few times per week, scrolling through his feed for a few minutes each time. Bob interacts with posts primarily by liking rather than commenting, and rarely posts new content.

Sarah has fewer friends, sessions, and time spent on Facebook than either Alice or Bob. She visits only once per week, and does not get significant value from the platform.

Because Alice, Bob and Sarah are all daily active users, they may look the same at first glance. But when you dig down to the engagement level, the differences become apparent. The product is clearly less sticky for Bob than for Alice, and less sticky still for Sarah. From a metrics perspective, Sarah has the lowest “Lness” which is the number of days visited per week (1/7), then Bob (5/7), then Alice (7/7). Thus, the number of sessions, which is a measure of engagement, can also serve as an early predictor of stickiness. That is — engagement drives stickiness.

As mentioned above, a sticky product keeps users coming back. Consider, for example, a cohort of users that joined Facebook on the same day as Alice, Bob and Sarah. Over a period of time, many of them will behave like Alice, finding great value in the product and coming back every day of their own volition. These users are highly retained.

Just like Alice’s group, Bob and users like him were retained on D1 (the day after installing the app). However, as these users begin to find less value in the product and engage in fewer of the “magical moments” that brought them to Facebook in the first place, they will visit less often. Some will not visit at all on the seventh day (D7). Similarly, most users like Sarah will not visit on D7.

The differences in stickiness for users like Alice, Bob and Sarah therefore manifest in retention. The more a user engages with a product, the more sticky it becomes for them, and the more likely they are to retain.

Because Alice, Bob and Sarah are all WAU despite their use of Facebook varying widely, studying only WAU would not allow you to detect the nuanced behavioral differences between such users. If users like Bob grew bored with the product and started to visit three days per week rather than five, for example, WAU would not change (nor would monthly active users, or MAU), even though DAU, stickiness, and retention all decreased. Eventually, such users may visit only a couple of times every two weeks; only then would the change be detectable by the WAU metric.

While Alice, Bob and Sarah may initially appear the same at the DAU level, their fate differs drastically based on engagement, stickiness and retention — which ultimately extends to the growth and fate of the platform.

The fundamental truth of this framework is that if a user finds value in your product, they will return. But it is also important to take your specific vertical into account. For example, the value of a multiplayer online game depends heavily on the number of concurrent users; a decline in concurrent users is therefore an early indicator of declining DAU, WAU, etc.

For an enterprise communication tool like Slack or HipChat, messages are the product’s core value. Therefore, a decline in messages sent will lead to a decline in users, eventually resulting in churn and lower monthly recurring revenue.

Whatever your product’s core value, your greatest growth lever is creating magical moments in which users recognize that value. Without such moments, retention will suffer and growth will be difficult to sustain. Mediocre companies focus simply on growth. A great company focuses on sustainable growth — through engagement, stickiness and retention.