Previous posts in this series covered content production, connections and inventory, ranking and consumption. In this post, we examine the role of feedback in engagement.

Feedback is a key component of any news feed environment; it influences ranking algorithms and drives additional engagement (including sharing) and time spent, thereby boosting overall consumption (Figure 1). Feedback can be divided into two basic types: explicit, in which users directly share their preferences and interests through activity such as likes, comments, reactions and hides; and implicit, such as time spent, hovering over a like, and navigation within a page. In a news feed model, anyone who can see a post can generally see its explicit feedback, as well (whereas in a stories model, comments and likes are visible only to the producer).

Even within one of these two types, not all feedback is the same. For example, comments are generally better drivers of engagement than likes. In part, this is because of the social pressure to like; for example, users often like a news story even if they haven’t read it. A deep understanding of types of feedback and associated user behaviors will therefore help you design a better product. 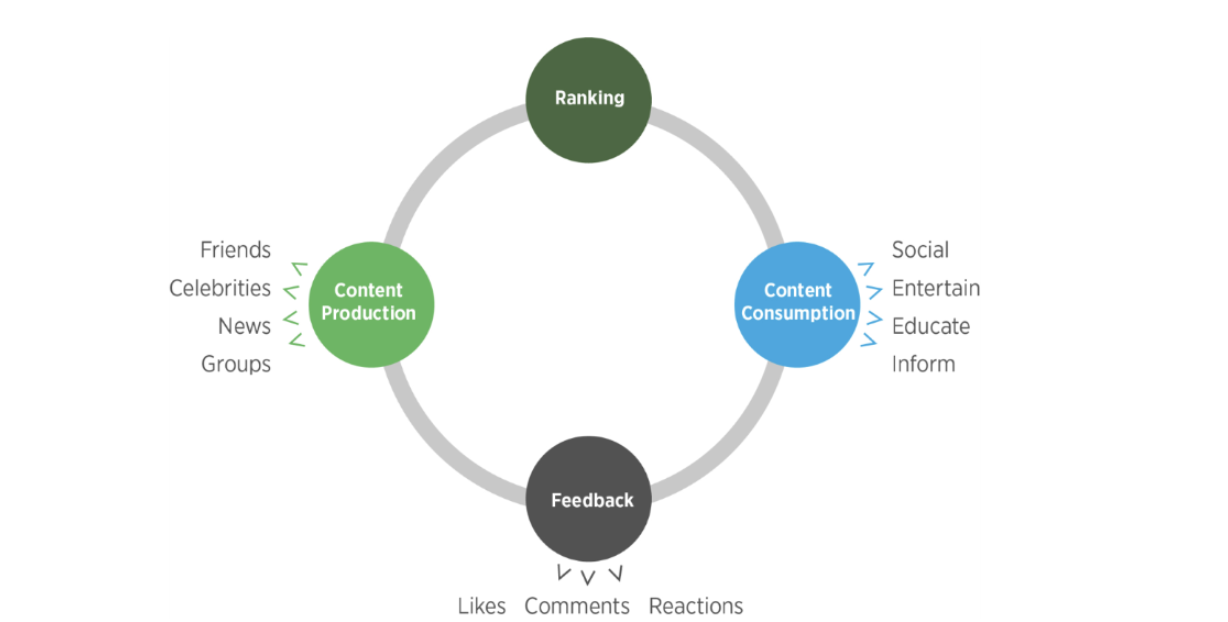 Users experience feedback as validation of their posts; the more positive feedback they receive, the more likely they are to produce more content. Conversely, relatively low levels of feedback may discourage them, leading them to post less frequently. Because humans are social beings, users naturally compare the feedback their posts receive to that of others’ posts—and because the ranking algorithm generally highlights posts based in part of the amount of feedback they receive, users often believe their posts have prompted relatively little engagement. Thus, reducing comparative pressure and designing your product to help users feel good about what they share will increase their motivation to share and promote engagement and long-term growth.

As the manifestation of users’ preferences and interests, feedback is highly valuable in your team’s efforts to develop an effective ranking system. Each feedback “signal” helps inform the relevance assigned to a given post and thus the order in which it appears, which drives time spent and, ultimately, growth.

Number of reactions and comments

Of these, comments are a much stronger indicator of true engagement. As discussed above, many users who do not actually read, and thus do not comment on, lengthy posts will still like or otherwise react to the posts largely due to social pressure.

Longer comments tend to be stronger forms of engagement than short comments.

The more time a user spends on a post, the more likely it is that they have found value in it.