Partnering with JITX: Breaking the Bottleneck in Circuit Board Design 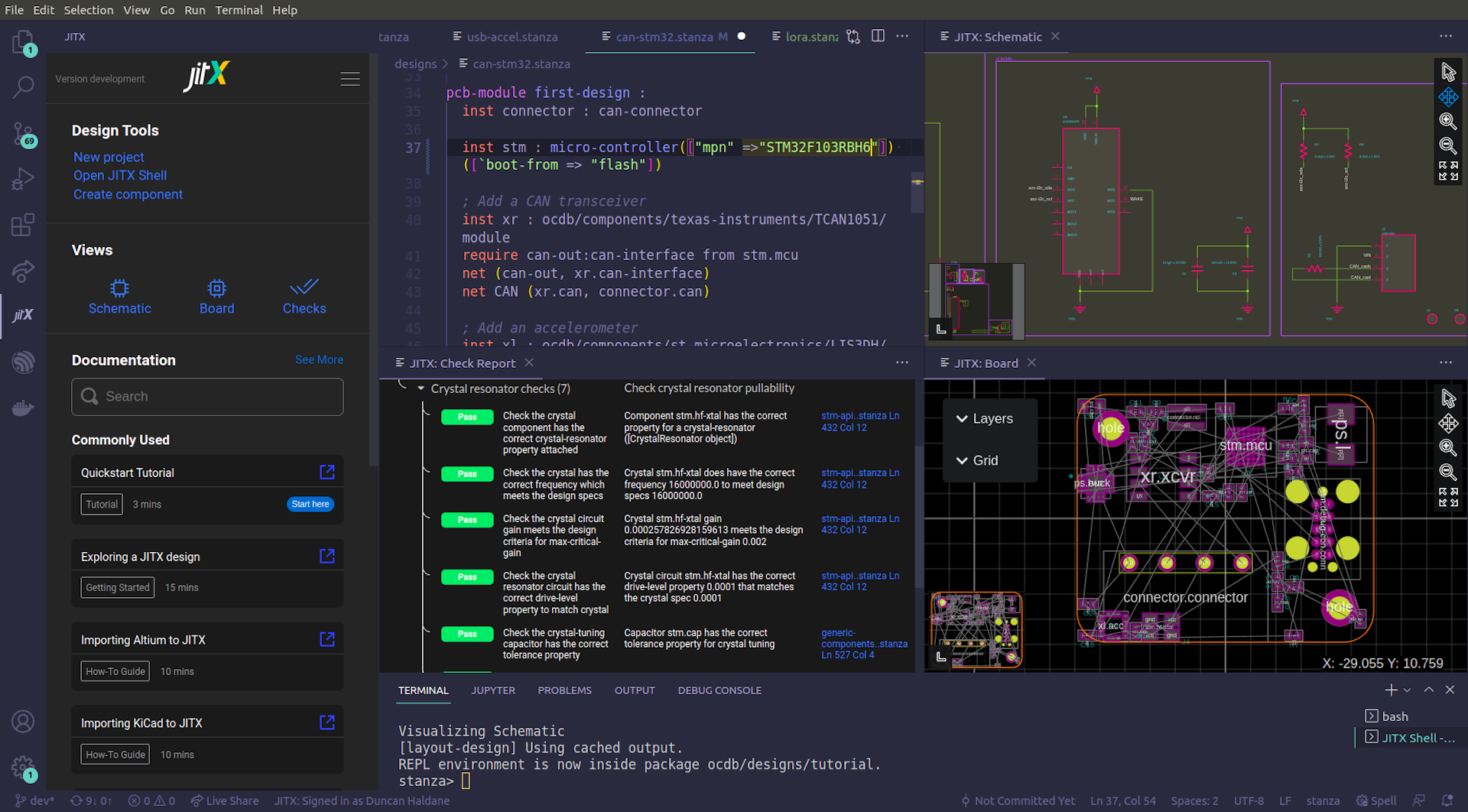 Designing a circuit board in JITX.

Look around the room you’re in right now. How many electronic devices can you see? From the smartwatch on your wrist to the microwave in your kitchen to the laptop you might be using to read this post, every one of these objects contains what’s called a printed circuit board (PCB)—an intricate, connected assembly of switches, terminals, semiconductors and other components arranged just so, to ensure the device does what it’s designed to do.

Today, the microchips on these boards are built using computer-aided design, which has enabled ever-smaller and increasingly complex configurations. But before the introduction of hardware design languages and other technologies in the 1980s, chips were laid out manually—and decades later, that’s still how most PCBs are largely made.

Because circuit board designs are highly variable and include more analog components compared to chips, they often require custom layouts. The majority of design work is done by hand, by electrical engineers—artisans in an otherwise automated world. But this manual approach comes with a high rate of failure, and high costs; if a board design is too big, too hot or too expensive, the components must be reevaluated and the wires redrawn, wasting time and precious parts that may be hard to come by due to shortages. It’s an unsustainable bottleneck, especially given rising demand for PCBs—and it’s exacerbated by a diminishing pool of talent as more students choose computer science over electrical engineering.

As critical and wide-reaching as this problem is, however, its persistence is hardly a surprise—because the solutions require a multidisciplinary marriage of electrical engineering, manufacturing, AI, programming language design and more. But fortunately for all of us, JITX co-founders Jonathan Bachrach, Duncan Haldane and Patrick Li are up to that challenge.

When Duncan first met Jonathan and Patrick at UC Berkeley, he was researching robotics and was fed up with designing hardware by hand. Jonathan and Patrick were building an automated hardware design framework called Chisel. As the three of them began working together, they recognized that PCBs were ripe for the same kind of paradigm shift that had revolutionized chip production decades earlier. This is the idea behind JITX: an intuitive interface where hardware developers can write code to generate and optimize board designs, increasing speed, reducing waste and dramatically scaling their impact.

JITX has since produced circuit board designs for everything from hazmat sensors to self-driving trucks—and they do it exponentially faster than the traditional approach. Now, with the public launch of their product, they’re enabling everyone to create board schematics with less risk and cost. And PCBs are just the beginning; their plans include expansion into semiconductor packaging, electromechanical robotics designs and more—optimizing not just circuit boards, but entire systems.

Reaching those goals will require solving cutting-edge algorithm and design problems, and Jonathan, Duncan and Patrick are continuing to actively build the JITX team—if you’re interested in joining them, please reach out. We at Sequoia are proud to support them by leading this round of Series A funding, and to be their partners in this long-overdue revolution in circuit board design.