Citizen’s mission is to make your world a safer place. Today, they do that through a free mobile application that leverages 911 data to keep you informed about local crime and incidents in your area.

When We First Met
We first met Andrew when he pitched his last company, Ooma, over a decade ago. We passed, but remembered his ability to blend deep technology with storytelling. Over a decade later, we met again to discuss Citizen—a mobile app that helped people band together to keep their friends and family safe. We were wowed by the core premise—to use the mobile phone to make the world a safer place. After a few more conversations, Andrew flew in from his small, 10-person headquarters in New York City to meet with us. The partnership was deeply intrigued after an early Friday pitch, and we called him at the airport and asked him to deboard his flight home so we could continue the conversation. Thirty minutes later, we were sitting at the SFO In-N-Out hammering out the details of a term sheet. We sealed the deal with a handshake, a milkshake and a selfie. 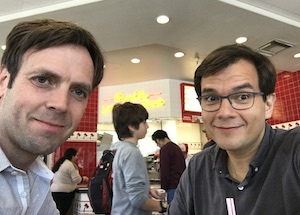