In my discussions with founders on product roadmaps, most conversations are centered around a timeline view of which new features are going to get added to the product. At the end of these discussions, one frequent question I find myself asking them is: what’s your anti-product roadmap?

Most roadmaps present a one-sided view of new features being built. The usual thinking : more features = more engagement = more revenue. The truth is that there is hardly a linear relationship between number of features and engagement. Product is a hits game – successful features are far and few but they produce a step change in engagement, and those are the most critical to build. The corollary to this is that most new features won’t move the needle, and it’s important to get rid of them. This plan to remove existing features is what I call the anti-product roadmap.

There are a few advantages to following this approach:

If I’ve convinced you that it’s just as important to take features out of your product, the implicit question is which. A fun exercise I periodically did at Dropbox was create a matrix that plots features on two axes: how many active users use a given feature, and how often is the feature used. 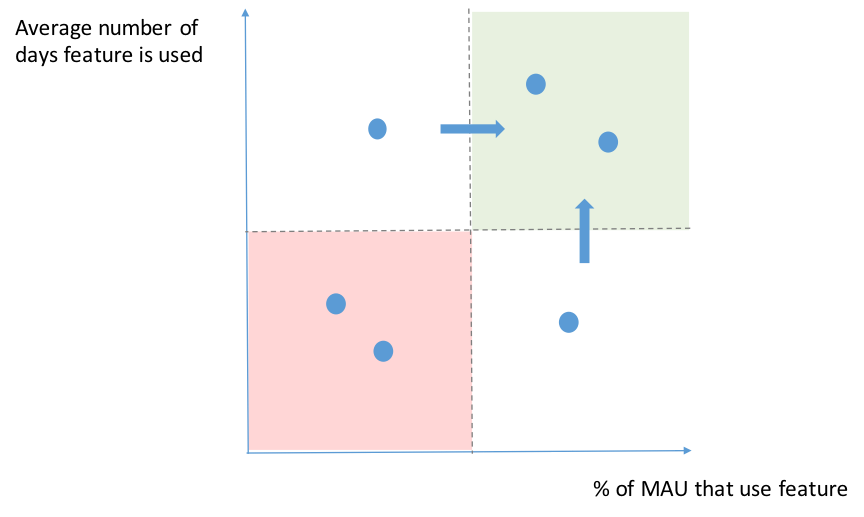 The goal of this exercise is to identify features that are used by a small fraction of users and aren’t critical for those users. The lower left quadrant is a great initial set of candidates to target for elimination since these don’t matter to enough number of users and don’t matter enough to the small fraction that are users. Success is having as many features as possible sit in the top right quadrant.

As you do this exercise, it’s important to remember that not all users are equal; you may want to create a similar grid for paid users or power users as you determine the impact of removing any existing features.

This exercise was eye-opening the first time I did it. From the conversations that followed, I learned that having a list of features on the chopping block often tees up a more thoughtful, opinionated and broader discussion on how a product should evolve than a typical product roadmap.