Jaydeep Barman didn’t set out to create a new food tech category. He simply grew tired of burgers and pizzas, and was craving a more Indian take on fast food.

While India is home to myriad mom and pop restaurants, the organized fast food sector is dominated by Western brands like Domino’s - which sells more pizza in India than anywhere else outside the US. After a late-night, post-drinks epiphany about the state of Indian takeaway, Jaydeep and his friend Kallol Banerjee set up Faasos, an Indian wraps chain.

In 2011, Jaydeep sent me a cold email with a concise, clear plan to turn Faasos into national quick-service chain that featured small-format restaurants and home delivery. We knew there was an opportunity for a large domestic brand in the fast food category. Jaydeep impressed us with his passion and clarity of thought. A term sheet was signed within 10 days of his first email. 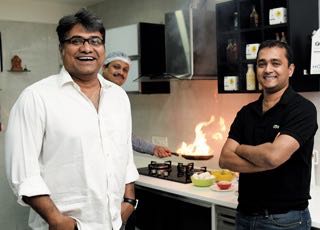 Over the next two years, Faasos expanded rapidly, opening 75 restaurants across India’s major cities – somewhat repeating what Dominos had done years before. While this traditional approach worked quite well given the small capex involved in setting up stores and the quick breakeven, it was clear soon enough that we weren’t going to build a great company by simply following someone else’s playbook. The challenges of a retail network started compounding at scale – location failures, high rents for good locations and most importantly the difficulty in balancing dine-in and delivery customers from the same store network.

Meanwhile, in 2013, a new business model in food services was taking shape – food discovery and delivery on internet. Jaydeep and Kallol were keenly following this trend and noticed the parallels between this and traditional ecommerce models. They had built Faasos as a tech-friendly brand, and was an early adopter of online ordering platforms. This gave them a front-row view on how technology was reshaping the food services industry. As CEO, Jaydeep sensed he needed to look at how to use technology through an entirely new lens. It was no longer enough to use tech as a tool to make his existing business model more efficient; he needed to leverage technology to disrupt his entire business model before competitors did that for him.

These thoughts coalesced at the Sequoia Entrepreneur Summit in Goa in 2014, where Doug Leone, Sequoia’s senior steward, delivered a powerful presentation on what he thought businesses can learn about scaling from the universal laws of physics. The primary job of founders, he said, was to find and eliminate the friction in their business.

That idea immediately struck home with Jaydeep, who was sitting amongst 50+ other entrepreneurs in the room that day. The biggest friction in scaling Faasos, he realized, was the outlets themselves. It was clear to him what the “rate limiting factor” in his business was. During a break after the presentation, Jaydeep shared his thoughts on the future of Faasos in the world where technology was becoming all-encompassing. We debated how we would design the business if we were starting from scratch in 2014. And in that moment, the seeds of the ‘cloud kitchen’ model was born.

Disrupting your own model

2014 was a unique inflection point, for both the company and the market. Uber pushed aggressively into India that year, restaurant aggregators like Zomato and Foodpanda were gaining steam, and Swiggy made its entry into the food delivery market. India’s consumers were starting to order everything from taxis to clothes and food through apps. When he got back from Goa, Jaydeep ran a quick survey and realized that his web and phone delivery business were indeed growing independently of the stores: 70% of customers had never set foot in a Faasos outlet.

He began shuttering restaurants, leasing lower-rent spaces for kitchens that were closed to customers and made wraps purely for delivery. We connected him with a developer we’d worked with before, who helped create the first version of the Faasos app.

The shift from a traditional fast food format to a cloud kitchen model changed the economics of the entire venture. The rent-to-sales ratio dropped from 15% to 4% over the next 2 years. But more importantly it took away the need to solve the #1 problem of retail – finding great locations! From finding locations, we moved to focusing on localities. This allowed the company to break the shackles of offline constraints and grow rapidly, without fear of mistakes.

Every restaurant brand strives to fight food fatigue, and to get consumers back to them more often. People don’t like to order the same thing, week in and week out. As a result, customer frequency is usually low in the F&B industry for a single brand. And, usually in this category, brands are built around a cuisine. The Faasos customer saw the brand as quick desi food at affordable prices. The Faasos wrap customer could not be enticed by the higher-priced menu additions, like pizzas and biryani, that they’d tested out.

At a Q1 2016 board meeting, when the cloud kitchen model was in full swing, we had a long discussion about how to increase life time value of a customer by boosting average order value and improving frequency through wider choice. The idea of launching a premium band, separate to Faasos, on the same platform was surfaced. After some debate, everyone jumped on board: we could drive a lot of synergies by turning a cloud kitchen into a multi-purpose one. It was a matter of creating a new brand, online, then using the same kitchen, common ingredients and the same staff to fulfil orders for different brands. The cost of launching a new brand online was far lower compared to launching a new brand of offline stores and the cost of failure was even lower. We could launch small across a few kitchens, target customers around those kitchens on the app+3rd party platforms, iterate the menu and get quick consumer feedback at relatively low cost and quick time.

The first new brand that caught the consumer fancy was Behrouz Biryani. Biriyani is a dish made across India, with myriad regional variations that have a lot of local love. To counter the ‘not my mother’s biryani’ syndrome, the team came up with a recipe, and a tongue-in-cheek backstory, rooted in historic Persia, and in August 2016 launched Behrouz Biryani, which was priced 2x above Faasos’ original wrap offering. It tested well in the first set of locations, and quickly went national. Within one year, Behrouz was delivering 200,000 Biriyanis a month. In less than 18 months, the brand became a $12M business with minimal investments in marketing and capex. And the brand started bringing a substantially different set of customers to the Faasos platform, thus expanding the market opportunity further.

With the success of Behrouz, we really began to understand the power of the cloud kitchen model. Behrouz proved that a different brand, and story, can draw new customers and entice existing consumers to buy menu items at a higher price point – all delivered with the same infrastructure. The cloud-kitchen model unshackled the company from several constraints of offline models. Location constraints, customer demographic constraints, scaling constraints - and even food fatigue - all evaporated.

Today, Faasos has 160+ kitchens that produce delivery meals for four distinct brands, including Faasos, Behrouz, Oven Story - a pizza brand, and Firangi Bake, which makes oven-baked dishes, like lasagne, with an Indian twist. The same customer can order a wrap for lunch and a biryani dinner, or something different for every member of the family. The team is always experimenting, fielding a few new concepts at any given time. The network in FY18 delivered same kitchen sales growth of >75% compared to the industry average of 10% to 15% same-store sales growth.

By disrupting its QSR model and adopting technology, Faasos ended up with a platform that offers endless possibilities to drive demand, solving the scaling challenge and delivering unmatched economics. The ability to experiment and test new products and brands, in real time, and at virtually no cost, allows Faasos to harness the power of iterative design for F&B. As Jaydeep says: “We don’t have to spend a penny before we’re sure a new brand is going to work.”

It’s early days for Faasos, but the company has established itself as a leader in a new category and growing rapidly using the power of technology. The virtual Indian takeaway is now being served.