An IPO With a Nice Ring to It 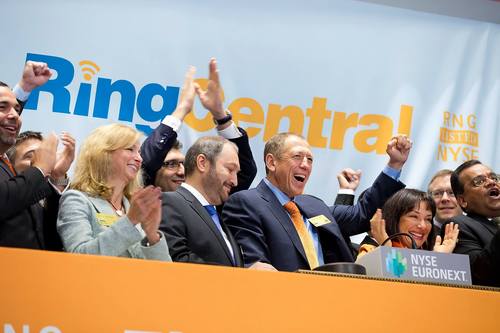 Smartphones have redefined people’s expectations for how and where they work. These days, you can respond to an email from an airplane and update a website from the beach.

But don’t you dare get a glass of water when you’re expecting an important call on your office line.

RingCentral is going public today in no small part because it’s managed to fuse office communications with today’s anytime-anywhere reality. Unlike traditional office phone systems that are fixed to a single device and a single location, RingCentral allows employees to send and receive calls, voicemails, texts and other communications on any device from any place. That means no more being tethered to the desk waiting for that client to call. When we first met CEO and founder Vlad Shmunis and the team in 2006, RingCentral hadn’t yet taken outside funding. Vlad was an experienced founder with a keen understanding of the telephony business, and RingCentral was a small business with a big opportunity: to do to for phone calls what cloud services like Salesforce.com were doing to business software.

Office phone systems are stodgy old things that haven’t really changed much in decades. These legacy systems, called PBXs, involve clunky hardware, require a lot of management and configuration, and tend to cost a lot. They were designed when “work” meant showing up at an office from nine to five.

RingCentral came up with a cloud-based approach that had the capabilities of the older systems but was focused on mobile and easy to buy, setup and use. It was a nice business with a lot of small customers, but the team recognized that in order to grow faster, it needed to raise capital.

The walls at Sequoia have framed stock prospectuses from companies that have gone public. After one of our first meetings, Vlad said, “We’ll be on that wall some day.”

Soon after we signed our original term sheet, we toured RingCentral’s office for the first time. It felt like a real family business—in no small part because Vlad’s wife and mother worked there. In fact, his mom was the controller, which we pointed out wasn’t the sort of arrangement typically found at companies with stock prospectuses.

We worked with the company to change that and in 2009 RingCentral released a version of its product aimed at bigger businesses. Around this time, smartphones were taking off and workers were bringing them to the office, a trend that became known as Bring Your Own Device.

Suddenly, the limitations of traditional phone systems became obvious: They work in the office where they’re deployed but nowhere else; they only work with traditional landline phones and faxes; they’re hard to scale and can’t interface with modern software like Salesforce.

RingCentral’s service, because it’s based in the cloud, is location and device agnostic. It’s also easy to add more people as a business grows. An employee just downloads the RingCentral app. When the employee leaves rather than take back the device the company can just de-provision her.

Vlad has managed to grow the business over the years, while maintaining the feel that makes a family business special. He’s loyal, a generous leader and a genuinely warm person. Congratulations to everyone at RingCentral. We’re excited to hang your prospectus on our wall.

Related Article Barracuda IPO: How to Take a Bite Out of a...