Threads is a platform designed to make work more inclusive by empowering teams to discuss and make decisions at scale.

When We First Met
We first met the Threads team in the San Francisco live/work loft that Rousseau, Suman, Mark, and Jon were sharing. In classic startup fashion, two of the co-founders lived on the first floor while the company worked on the top two floors. We were drawn in by Rousseau’s infectious enthusiasm and emotional intelligence—after graduating college early, he went on to be one of Facebook’s fastest growing product managers—and we instantly recognized the need for the workplace communication tool they were developing. We continued to meet over the next few months as they worked on Threads, and when Rousseau shared the story with the partnership on a Friday morning, we immediately started working on a term sheet. We sealed the deal twenty-four hours later on the roof of his apartment as Karl the Fog rolled in. 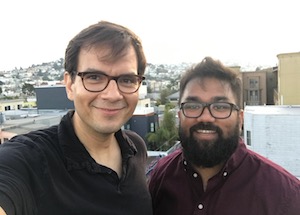 A Thread with Threads